END_OF_DOCUMENT_TOKEN_TO_BE_REPLACED

Mount Carmel College-Bangalore launches a unique startup in its campus

Myriad Limited is housed in a small room with just the bare essentials: a table, some chairs, a desktop and several papers strewn all over. The three young girls crowded inside are talking shop – recession, expansion plans, an upcoming general body meeting. 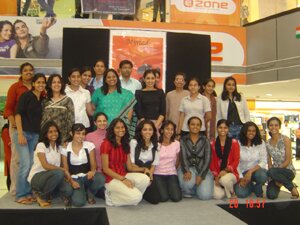 A typical scene from a garage startup, you might think. Well! It is, but with a difference.

The unique factor that distinguishes Myriad from any other startup is – it is a ‘campus company’ of Mount Carmel College, Bangalore, and these girls are students who are engaged as company directors. Spearheaded by the Entrepreneurship Cell, under the guidance of National Entrepreneurship Network (a non profit organization sponsored by Wadhwani Foundation to promote entrepreneurship), this startup is perhaps the first of its kind – built by the students, of the students and for the students.

Launched in September 2008, Myriad defines the making of a serious startup – complete with business plan, balance sheets, directors, shareholders, angel investor, Prospectus, Memorandum and Articles of Association. It deals with two independent products – chalks that are brand-named Scribble, and a youth magazine called Myriad. It has 22 employees, 525 shareholders, over 15 advertisers and a college full of customers. Six months into the business, Myriad posted profit of Rs 5,000 for the first time in March, 09.

“Our MCC-NEN E Cell has been active in promoting entrepreneurship among the students. We wanted to do something big and long-lasting, so we reasoned – why not build a startup in campus itself? It was convenient, we had a ready market in our college mates, the risk was low and our college was ready to support us by introducing it as a credit course. So we went ahead with the idea,” reveals Director Aditi Nag, a third year Commerce student.

The MCC-NEN E Cell began by organizing an intra-college business plan competition, where students were invited to present sustainable business ideas. A panel of experts, comprising faculty, judged the entries. 10 ideas, including that of a photocopying shop, juice stall, food store and recharge counter were rejected due to market competition, low margins and too many regulations. Two ideas finally made it – that of a chalk manufacturing unit and an advertisement-driven magazine.

Even though chalk manufacturing did not promise good returns unless it was produced on a large scale, it offered the students “a non-technical feel of production”. “We knew that chalk production was vulnerable to weather changes, had high wastage and ran the risk of becoming soft and brittle. However, we wanted to take it on and get our hands messy,” recalls Sylvia Pinto, another Director.

Myriad magazine, on the other hand, was a safer choice. It ventured to help marketers reach out to the youth directly and effectively. By making it a college-only magazine, and distributing it free of cost, Myriad magazine focused on bringing the advertisers’ messages to as many youngsters as possible. Aditi Nag feels the feet-on-street experience of getting advertisers is giving the marketing team a true feel of business.

Starting up not a joyride, but worth the trouble 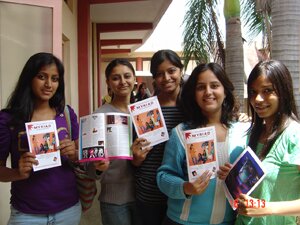 Fund raising was the first challenge, reveals Sylvia. The chalk business needed seed money for training and raw materials, and the publication didn’t promise advertising revenue till at least its first issue was out. So Myriad issued shares to college students and faculty at Rs 30 per share. It raised Rs 20,000 capital through sale of shares. Prof Vasanti Venugopal, Entrepreneurship faculty in-charge at MCC pitched in as angel investor, sponsoring the training of 10 students in chalk-making and connecting them with the suppliers. Prof Vasanti recently completed NEN Entrepreneurship Educators Course (EEC) conducted in partnership with Indian Institute of Management, Bangalore and Stanford Technology Ventures Program to become an accomplished entrepreneurship educator.

Meanwhile, the MCC management supported the Myriad magazine in the initial stages by providing Rs 10,000 as loan to meet printing expenses. The aggressive magazine team soon managed to rope in advertisers like Jealous Jeans, Reva, Wipro and Alliance Francaise. Jealous Jeans was so enthused that they even sponsored the mega launch of the magazine at upmarket Sigma Mall.

Another challenge was building the team. The E Cell members created job profiles and posted them on notice boards. They involved volunteers from MNCs like Wipro and IBM to conduct the group discussions and interviews of interested candidates. They studied other startups to understand their hiring strategy. Myriad today has a finance manager, a purchase manager, a marketing team for Myriad magazine and a production team for Scribble. It has also appointed a Commerce student as Company Secretary.

Handling operations was a great learning experience for the Myriad team. The Scribble team worked after college hours on the campus terrace, manufacturing 300 chalk pieces a day. The Myriad magazine team sometimes had to excuse themselves from class to attend a client meeting.

“We had to work for attendance, work for marks, and work for the company to keep it running. I don’t know how many of us study everyday, but we work everyday. It’s not easy but it is exciting to run a company at such a young age,” shares Naina, Managing Director.

Meanwhile, Sylvia claims to have learnt a lesson in ‘friend management’. Working under constraints and with limited resources, she has become more assertive and firm while dealing with her team, not excusing bad performance easily. Her colleague Jinal, a rather shy girl has now discovered her strong negotiation skills.

The way ahead: A startup of my own

When Prof Vasanti recently asked how many from the Myriad team would start their own ventures in future, 16 out of the 18 present raised their hands. “I don’t look at Myriad as a student set-up, we actually function as a full-fledged business. I would like to take my learning forward, and start a venture of my own,” shares Naina.

Prof Vasanti isn’t surprised with the reactions. “The experience in Myriad has been a revelation for students who are inclined to start ventures of their own. It has exposed them to various elements in the lifecycle of a startup. The team has been part of the concept and starting-up phase, worked hard to make it run, and the directors in their final year are now preparing to hand over to the oncoming batch. This hands-on exposure has matured them, built their confidence, made them analyze like serious entrepreneurs. Overall, with Myriad, the MCC-NEN E Cell has contributed to creating an ecosystem that will nurture similar ventures in the long run,” she says.